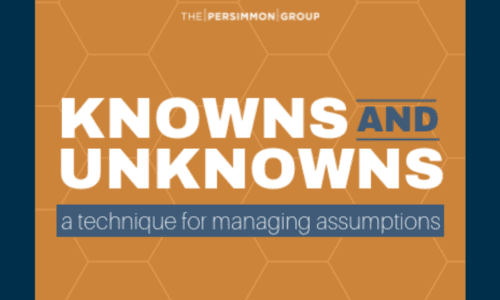 How to Use the “Knowns” and “Unknowns” Technique to Manage Assumptions

How to Use the “Knowns” and “Unknowns” Technique to Manage Assumptions

How to Use the "Knowns" and "Unknowns" Technique to Manage Assumptions

This is the final installment of a three-part series on managing assumptions. In our first post, This Ain’t Freakin’ Texas, we discussed the three types of assumptions project managers encounter most often. In our second post, we examined the conditions that cause us to make assumptions.

In this post, we will show you a “Knowns” and “Unknowns” technique that quickly answers three basic questions to help you identify and manage assumptions:

There are four categories of information and each category consists of two words being either: “Known” or “Unknown.” 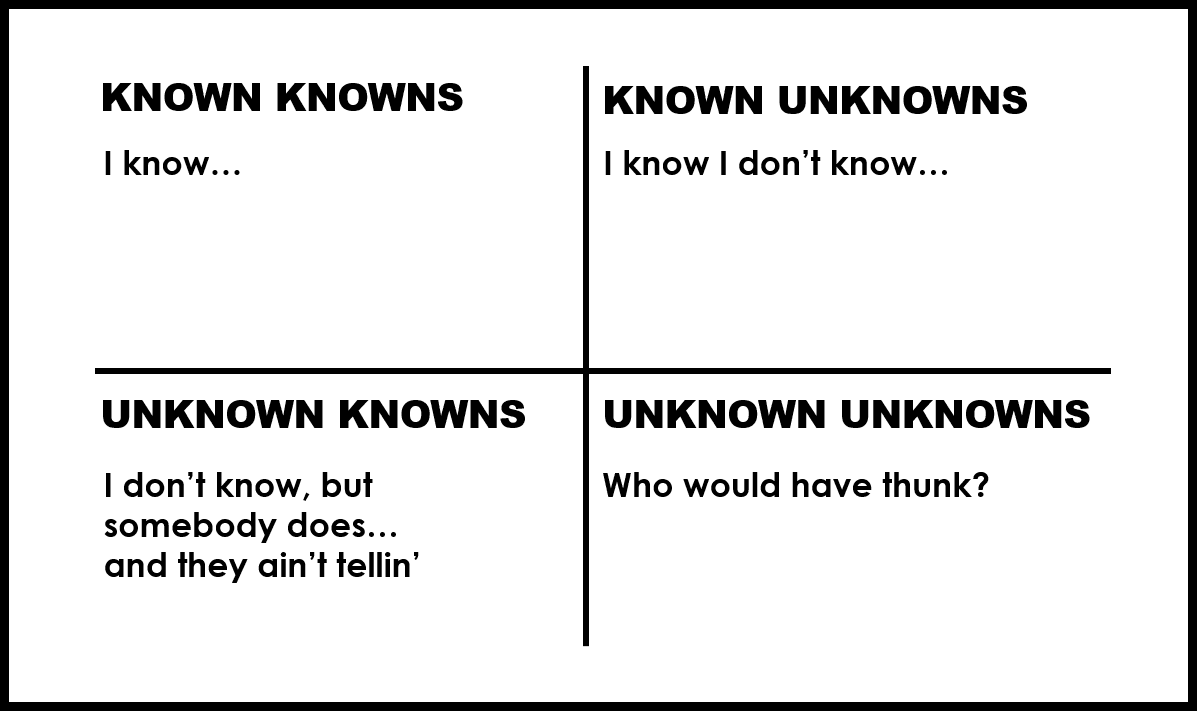 Known Knowns are assumptions that have been validated and are now facts. However, it is important to note that known knowns are not necessarily static. Known knowns that could change over the course of a project — the price or lead time for a certain component — can significantly change the scope, cost, or schedule, making them important to identify and monitor as a potential risk.

Known Unknowns are assumptions that we haven’t or can’t validate. Most assumptions identified during project planning start in this category. They can be classified into three types:

The last type of known unknowns, those that can’t be controlled — flux in the price of fuel, estimated weather delays for a construction project — should be classified as risks in project planning.

Unknown knowns are assumptions that could have been identified as known knowns in the planning, but weren’t, and is now affecting the project. Unknown knowns occur most often as the result of poor communication. A project manager knows that a certain township reviews permit applications only once per month but fails to volunteer this information (or is not asked). The next project manager working with this township experiences the same pain point.

Chalk them up to Murphey’s Law. Unknown Unknowns are true surprises — a project that encounters a major delay due to a political coup in the country where the equipment is manufactured. Unknown Unknowns should be shared through lessons learned for future risk consideration for projects as a Known Unknown.

Watch the Known-Knowns video and download the PowerPlay™ from BillFournet.com.

Assumptions are elemental to project management—in our language and our planning. They are often referred to as “silent assassins” because we don’t recognize them until it’s too late. The above technique provides a quick and simple approach to identify and determine which assumptions you need to focus on first. Sometimes, all it takes is a phone call or an email to get an answer. Yet, so many teams fail to take that step.

Don’t become a victim of assumptions—coach your team to see them, rate them, and resolve the assumptions they can while managing the rest as risks. It will shift team members out of daily fire-fighting into a more proactive, disciplined team as ossifications of assumptions dwindle in their frequency.

About the Author: Bill Fournet 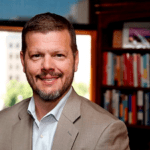 Bill Fournet is the Founder and CEO of The Persimmon Group, the award-winning management consulting firm he founded in 2004. Bill loves to solve complex problems for organizations of all sizes, and remains hands-on at Persimmon, consulting clients of all sizes and in many verticals.

How to Deal With a Disengaged Project Sponsor

What’s a “Good” Salary for a Project Manager?

by Sara Gallagher, PMP
View All

Interested in how we can help you with Project Management?